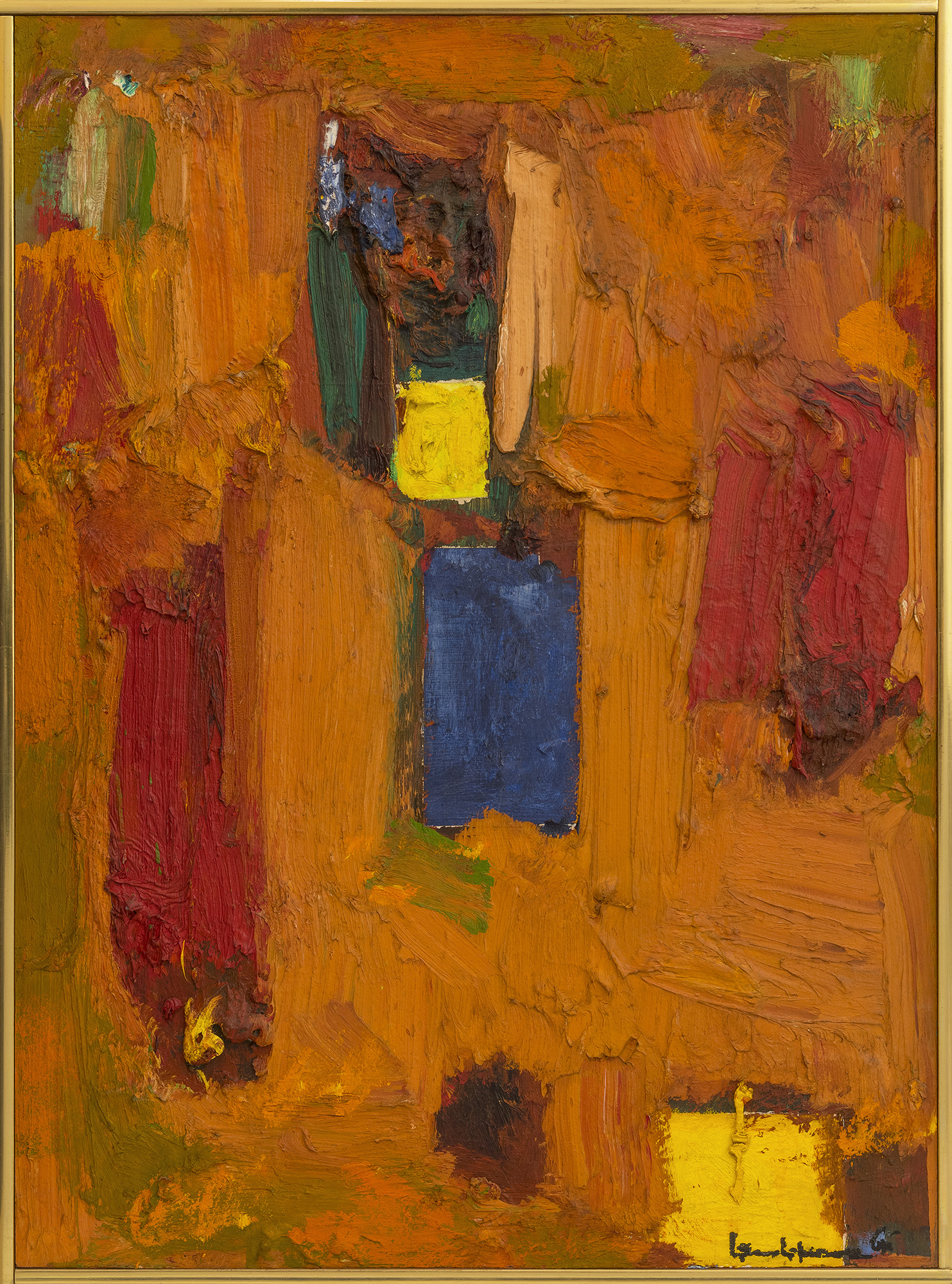 Hans Hofmann had an immeasurable influence on generations of artists, first in his native Germany and then in the United States. Hofmann was known equally as an enigmatic teacher and an artist, at times categorized as an Expressionist, neo-Cubist, Surrealist, leader of the New York avant- garde, and pioneer of Abstract Expressionism. Born in Weissenburg, Germany in 1880, Hofmann spent his formative years in Munich. He enjoyed a privileged upbringing through the connections his father made as a bureaucrat in the German government. While his father insisted that Hofmann pursue a career similar to his own, he had alternate plans. At eighteen, he began art lessons with the German painter, Moritz Heymann and soon after enrolled in a graphic arts school.

In 1905, Hofmann moved to Paris where he developed a strong foundation in Fauvism and Cubism. During the decade spent in Paris, Hofmann met Henri Matisse at the Académie de la Grande Chaumière, and befriended Pablo Picasso, Georges Braque, André Derain, Sonia and Robert Delauney, and Gertrude Stein, all regular patrons of the legendary Café du Dôme. The outbreak of World War I in 1914 forced Hofmann to return to Munich, where he was introduced to Wassily Kandinsky, the pivotal Russian painter and theorist. Kandinsky was a pioneering abstract artist, using vibrant and expressive masses of color with no recognizable subjects. He credited his revolutionary theories of abstraction to contemporary atonal music that disregarded traditional harmonies. Hofmann was compelled by Kandinsky’s theory and practice of art and would carry this influence with him when he opened his first school in 1915.

The Hans Hofmann Schule fur Bilende Kunst was in a Bohemian district of Munich and attracted artists from across Europe and the United States. His engaging lessons on modern avant-garde painting brought him wide acclaim. Having cemented his reputation as an instructor of modern art, Hofmann was invited by a former student to teach a summer course at the University of California at Berkeley. Hofmann returned to California for several summers and finally remained in the United States by 1932. In New York, Hofmann was a regular faculty member of The Art Stu- dents League, where his pupils included Ray Eames, Louise Nevelson, Lillian Keisler, and many others who would earn recognition in the years to follow.

In 1934, Hofmann founded a school of his own, called the Hans Hofmann School of Fine Arts in New York. By 1938, it was located at 52 West 8th Street in the thriving artistic enclave of Greenwich Village. Hofmann also led summer programs in Provincetown, Massachusetts, an artist’s colony that later drew Abstract Expressionists in the 1950s. His reputation continued to spread through his school and unique theories of art. Students were captivated by his first-hand experience with European modernism and were encouraged to experiment with new techniques and styles.

For nearly twenty-five years, Hofmann was devoted to teaching and had little time for his own art. By the 1940s, he was painting again and revised his writings on painting technique for his texts Search for the Real: And Other Essays (1948) and The Painter and His Problems (revised 1948). His most famous theoretical concept was the “push-pull,” which described the dynamic relationship of pictorial elements that both asserted the flatness of the canvas and the illusion of space.

The present work, Concerto in Colors, exemplifies Hofmann’s “push-pull” theory as well as his use of a color as a vehicle of expression. The painting is a masterful example from Hofmann’s late “Slab” paintings, where heavy rectangular slabs of intense colors are interspersed with fluid fields of color. Concerto in Colors depicts thick, impasto orange brushstrokes overlapped across the canvas. A thinner background layer of forest green is barely visible underneath the globs of paint, with the two opposing textures fulfilling his “push-pull” theory. Bursts of red, blue, green, and yellow are balanced across the canvas, achieving a harmonious composition in both color and form. The musical reference in the title recalls the admired Kandinsky, whose theories of abstraction and music influenced Hofmann in his early career.

Recognition for Hofmann’s work was received later in his career; his first solo show was held in 1944 at Peggy Guggenheim’s Art of the This Century Gallery when he was sixty-four years old. He then became part of the emerging New York School with artists Jackson Pollock, Robert Motherwell, William Baziotes, Clyfford Still, and Mark Rothko. He began to exhibit widely, with a 1948 retrospective of his work at The Addison Gallery of American Art, and a 1957 retrospective exhibition at The Whitney Museum of American Art. Throughout his influential career, Hofmann boldly experimented with color, form, and space, creating an impressive body of work that impacted countless artists.